oh god, I fear my booty AND my gravy are lacking. image source: straightfromthea.com

We have finally reached the END, y’all!  Praise ANDY!  As you may have gleaned from the previous entries, I did not enjoy Secrets of the Southern Belle very much.  I have gone through a LOT of dreck (books “written” by seeming illiterates [Teresa Giudice)], raging narcissists [Ramona Singer] and a woman who has less self-awareness than any other reality star, and that is saying something [Alex McCord]), but I am so disappointed in this sexist nonsense because I actually LIKE Phaedra.  She is certainly smarter than 99% of the people on Bravo, has a fantastic wit and her slutty transparent vacation looks give me LIFE.  Plus I love anyone who matches their eye shadow to their clothing (see above).  It’s very seventh grade and I ain’t mad at that.  I understand that culture in the south is different than in my flyover upbringing, but I cannot get behind the whole helpless woman act.

BUT I am thrilled that Phaedra ended the book (after her funeral tips, NATCH) with some of her tried and true recipes.  I love that she didn’t load it up with a bunch of shitty recipes (see: Khloe Kardashian’s “recipe” for a vodka soda) and just added a few that are legitimately southern: sweet tea, mac and cheese and southern-style BISCUITS.  My husband LOVES biscuits and since I basically learned nothing from this book but how to please a man, I decided to make them for him.  I was intimidated though- the recipe is very simple, but it’s one of those ones that seems to be so easy to fuck up.

first I suck at bedazzling and now THIS! image source: giphy.com

BUT I figured it would be just perfect if I somehow screwed this up royally, so who cares, really.  I am not worried what a bunch of uptight biddies think of my baking skills (mostly because I don’t know any biddies, or really know what they are).  Onto the cooking!

ingrediences!  sorry, that joke is here to stay.

Now, Phaedra’s recipe called for buttermilk OR whole milk, and also white sugar.  My car was in the shop all day and it was cold af so I didn’t feel like walking to the grocery store for something I was probably going to ruin even if I had the correct items (do you like how I am giving myself 100 excuses for my own incompetence?  just call me a Bravolebrity) so I decided my stuff was close enough.  I did actually buy the self-rising flour (I consulted my husband like a good lil brainless woman, who suggested that my using regular flour might not actually “be totally fine”), so I already felt like I had put a lot of effort into this.

I mixed the shortening into the flour with no pastry cutter or butter knife- just sort of swirled a spoon around and karate chopped at the mess.  Phaedra’s recipe was incredibly short and there were zero photos, so I was just sort of just using an(uneducated) guess as to when to add the milk.  After it sort of looked like dough, I rolled it out on my counter, using a glass as the rolling pin because this Midwestern belle does not OWN a rolling pin.  I know, I am a total fail of a woman.  No one tell Mike Pence!  I formed them into sort of biscuit-shaped objects, put it in the oven and prayed for Jesus to fix my biscuits. 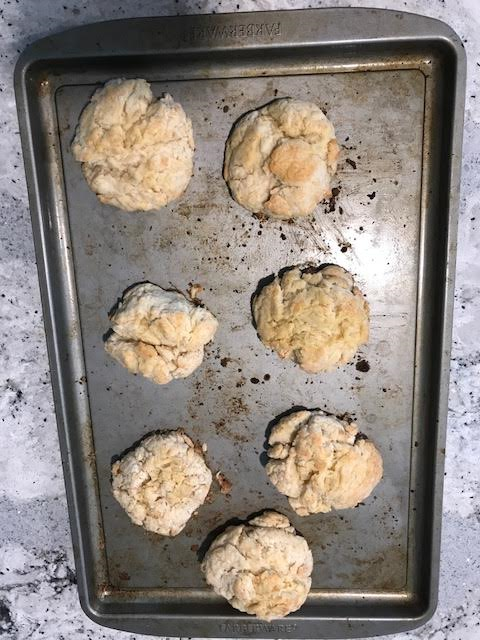 I was SHOCKED that they didn’t fall apart- Phaedra says to mix the dough but don’t overwork it, so I was terrified of making them tough.  (Why am I so scared of biscuits? what is the worst that will happen, some lady in a hot pink suit and pearls will show up at my door and passive-aggressively shame me?  I would LOVE for that to happen!)  However, they looked actually like… normal biscuits?

You guys, it was GOOD!  And, like Phaedra when she isn’t calling Kenya “oatmeal pie face, wasn’t tough at all.  So I guess in the end, I DID learn something!  And I still can hang my own fucking curtains, thank you.

One thought on “Secrets of the Southern Belle: Cooking with Phaedra”