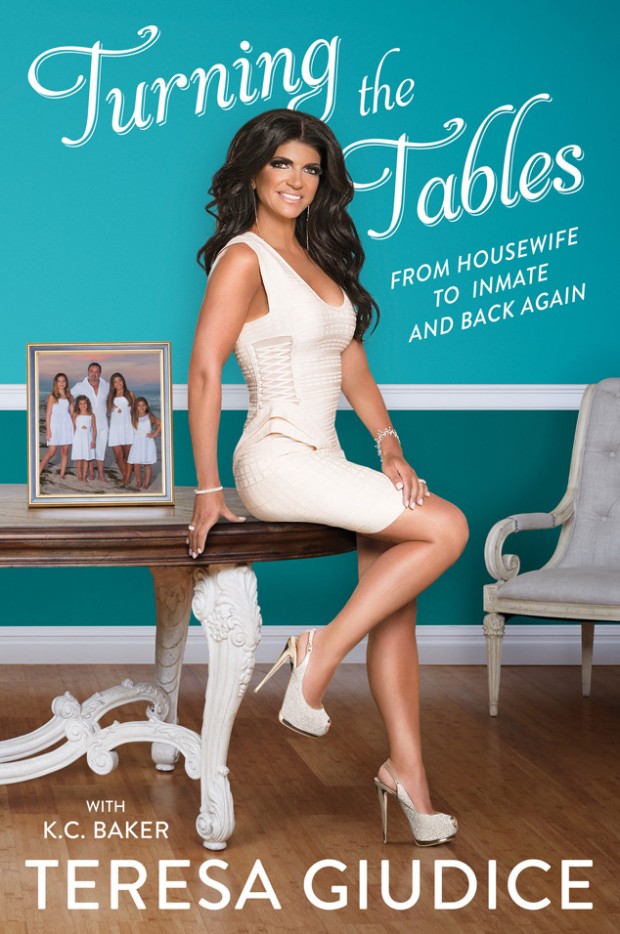 I am dying at this cover alone. THAT DRESS. image source: eonline.com (of course)

Ah, Teresa Giudice.  Everyone’s (no one’s) favorite table-flipping, brilliant inmate. I have been psyching myself up to read (or in this case, listen) what I am sure is to be the next Pulitzer Prize-winning tome from a housewife.  Although, I guess she has had like ten best-selling cookbooks and wtf have I done lately?

I have been waiting my whole life to use this gif. #bucketlist image source: decider.com

ANYWAY.  I assumed it would be… not great, but once I saw that Teresa herself was narrating, I perked up a little bit.  A woman who constantly uses malapropisms with the confidence of a white male Republican presidential candidate is a woman after my own cold, black heart.*

* my favorite part so far was when the “co”-author clearly added the word malapropisms to the book (I heard it after I wrote that paragraph) and Teresa blunders it a bunch of times before saying ‘I don’t know this word!’ Pure magic. 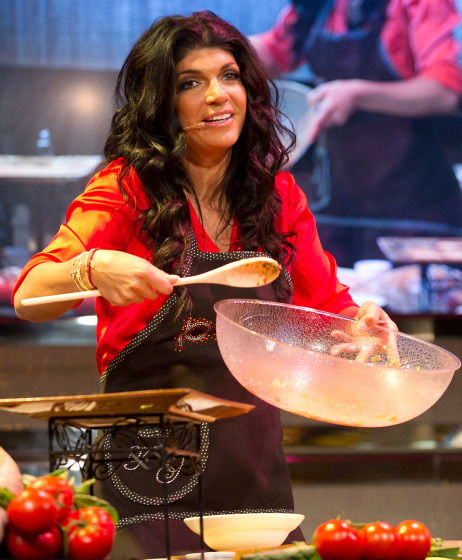 So you can imagine my WHOA-AH when I started listening to the book and heard Teresa’s narration skills.

It’s like she took 40 Xanax before reading.  I have NEVER (in all of my audiobook binges, which have so many bad narrators, it’s embarrassing) heard someone so monotone in my entire life.

anyone? anyone? giudice? image source: gifsoup.com

Once I got over the fact that a female Ben Stein stranded on the New Jersey turnpike with an opiate addiction would be reading me this book, I tried to focus on the story.  It is really difficult to concentrate when even Teresa seems so bored she wants to die.

In 2014, Teresa was sentenced to 15 months in prison after pleading guilty to several fraud charges.  Even though she seems to maintain their innocence, I guess even she could see they weren’t going to get away without serving a ton of jail time if they went to trial.  In what seems like a moment straight out of reality tv magic, Teresa served her prison sentence at the correctional facility in Danbury, CT- the same price that Piper Kerman, the author of Orange is the New Black, was incarcerated.  Kerman’s book was a fascinating look at prison through the eyes of a privileged white woman who never expected to end up as a criminal.  It inspired the ground-breaking Netflix television show of the same name.  While reading about Piper’s last moments with her fiancé before entering the prison for the first time, you can feel the terror at anticipating the unknown.  While listening to Teresa’s last moments, you can feel yourself mentally making a grocery list.

do you guys have Fabellini in here? image source: buzzfeed.com

Teresa’s intake story is actually very similar to Piper’s- it’s just difficult to believe that she actually felt any emotion at all when entering prison when she sounds like a low-powered robot on downers.  But anyway, Teresa is in prison now.  Time for the classic: and how did she get there?

Oh… my god… you guys… her… speech patterns.. plus… the monotone voice…..

I think I’d rather get a massage from juicy joe than have to listen to this again. image source: tumblr.com

Teresa goes quickly through her upbringing, her family’s origins in Italy, which is somewhat interesting in a learning about your co-worker you sort of like’s cultural history sort of a way.  She mentions several times how close her brother and she were growing up, and HOW IMPORTANT family is to her.  This is a theme here, I think.  FAMILY.  Or as Caroline Manzo says, FAMBILY.

Blah blah blah, her mother is a saint, her father is a hot-tempered Italian stereotype, spaghetti, lasagna.  Abudanza.

OH MY GOD I JUST LOOKED AND I STILL HAVE ALMOST EIGHT HOURS LEFT ON THIS BOOK.

Send help.  And booze.  I would do anything to recast Danielle Schneider (Shauna Maducci, the Teresa character from the greatest show ever, The Hotwives of Orlando) as the narrator to get me through the next eight hours.

So, after jumping all over the place in her family timeline, we finally get to hear about what we all purchased this book for: to hear about the ROMANCE with Juicy Joe.

what. a. dreamboat. image source: people.com

Basically, their families were friends, they knew each other their whole lives, they got married.  Teresa emphasizes several times that Joe really loved her, and she knows this because he took her out for fancy dinners and bought her nice things.  And gave her whatever she wanted.  ALSO she mentions that Joe had long, curly sandy blonde hair, which, do me a favor and picture the man in the photo above with a mop of blonde curls.

So now they’re married, get pregnant with Gia and OMG STILL SEVEN MORE HOURS.  How is this possible?  Does she talk even slower?  Tell us a list of words she doesn’t know the meaning of?  Then comes Gabriella, everyone’s favorite, Milania, and Audriana.

what a delight! image source: tumblr.com

Then Teresa manages to make the story of her joining Real Housewives BAHRING too!  I was at least hoping for some behind-the-scenes gossip, but, like the rest of her book, it sounds like a really long and drawn-out puff piece for US Weekly. Future co-star Jacqueline Laurita asked her to join the show after she and Dina Manzo agreed to be on what was originally titled Jersey Moms.  She had never seen an episode of Real Housewives before, blah blah blah.  There is nothing here that if you are even a casual fan you haven’t heard before.  And if you are a casual fan, why the f are you reading this book?!?!?  Can you please read the rest of it and send me notes????

Finally, Teresa starts talking about her “troubles” with the law.  It is so bizarre— she never discusses what the charges are about, beyond that they are for “fraud” and other words she can’t really pronounce.  She acts like all of this is happening TO her and she has done NOTHING to deserve it- like she is getting sent to prison because she had broken some obscure law that no one had ever heard of and like Katniss Everdeen before  her, Teresa must solider on and be brave for her family in the face of adversity.

Teresa goes through all of her court proceedings with all of the intensity we have come to expect from her at this point.  Imagine your freshman year Biology professor reading directly from his powerpoint presentation at 8 am in a sparsely-attended 600 person lecture hall.  Now take it down ten notches.  Voila!

“Oh my God.  I was… so scared.  This was… my worst nightmare.  What did I do… to deserve… this?” You mean besides [allegedly] “conspired to commit mail fraud, wire fraud, and bank fraud, making false statements on loan applications, and bankruptcy fraud in a 39-count indictment?”

Finally, what we have all be waiting for!  On January 5, 2015, Teresa enters Danbury as an inmate to begin serving her 15 month sentence.  To be continued in PART TWO!

you sure deserve them!  image source: Hollywood.com

11 thoughts on “Turning the Tables: Part One”