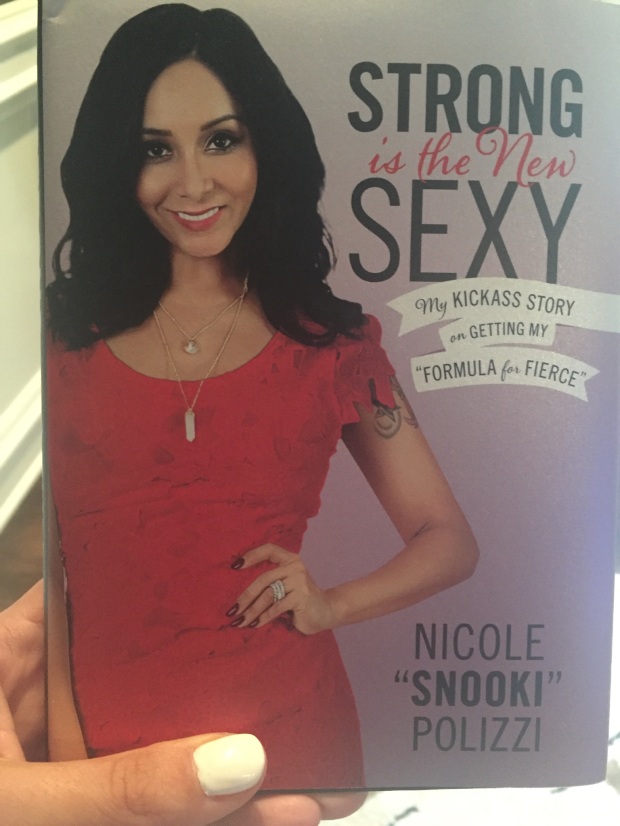 Oh Snooki… where can I even begin?  When this lil drunken Italian dumpling first staggered her way onto MTV’s Jersey Shore in 2009, America was immediately in love.  Nicole Polizzi rolled in in a emblazoned trucker hat, a deep deep tan, giant hoop earrings and announced “the party’s heeeeeeere!”  Instant pop culture phenomenon.

Unfortch, our little Snooki Snooks had some missteps along the way.  All of the constant partying (SHOTS AT KARMA!!!) and late night pizza started to pack on the pounds.  Oh, and she slept with about a million juice bag gorillas and got arrested a time or two.  But who hasn’t?

no arguments there, my love. image source: giphy.com

But after Snooki finally met her meatball of’ life, Jionni LaVelle, she was (sadly) ready to take it down a few notches.  Jionni (who, hilariously, is like four inches taller than Snooki, who stands at 4’9″) was very into lifting weights and wasn’t all about blacking out and peeing in plants sans underwear on a night out at Karma.

godammit, Jionni. I mean, i’m happy you two found love and all, but as Snooki would say, wahhhhhhhh! image source: giphy.com

I have to say, even though this is essentially a health book with lots of drawings of different workout moves, the publisher really missed the boat by not making this an audiobook.  The book is written in exactly Snooki’s voice and is genuinely hilarious.  I would’ve loved to hear her read it.

as one does. I am not sure what she is talking about, but I LOVE it. image source: giphy.com

Initially, Snooki (I feel like I should call her Nicole but I just can’t) talks about her fairy tale wedding to her diminutive guido.  Things that went through Snooki’s brain during her vows: “Holy fuck, we’re married.  I just swallowed my gum.  I have to poop.” I love that even though her look is a lot less Ed Hardy threw up on a Jello-shot stained neon tank top, she hasn’t lost the essential magic that is Snooki’s brain.

you just be you, boo, and don’t worry about the big words. image source: giphy.com

Like Snooki herself, the book is all over the place. She jumps back to her Jersey Shore days and then makes a list of things she wants to teach her daughter.  One lesson she wants to instill in Giovanna is to always stand up for yourself.  Snooki says that she always holds her ground with those that try to hold her back, even the motherfucking governor of New Jersey.  You guys, I totally forgot that Chris Christie went hard at Snooki and her fellow Jersey Shore cast mates.

what about YOUR bridge debacle, CHRISTIE?  Snooki will NEVER be dtf- down to forgive. image source: giphy.com

Even though I kind of have no idea what most of this book is about, I sort of love it anyway.  It’s like spending a day in Snooki’s brain, which has a lovely hot pink and black scheme and penis shaped confetti rains from the ceiling.  She lists her vows to Jionni, one of which is “I will Misery your ass” if he ever tries to leave her.  Snooki plans to tie him to a bed and break his ankles if he wants to get divorced.  You know what?  I believe her.  Jionni is a lil man and Snooki is strong af these days.  Plus her court looks would be TO DIE FOR so I sort of hope this happens.

god I am LIVING for vintage Snooks. image source: giphy.com

Next, Snooki talks about her girlfriends and why they are so important to her.  Most of her best friends Snooki met in preschool, and she loves them to this day.  JWoww (is there two w’s?  I wworry I am not doing Jenni Farley justice) is her modern day bestie, and Sammi (of Sammi and Rahhhhhnnie) and Deena (Snooki’s fellow meatball who I will love forever for her constantly saying “underwears” and “do sex to me”) were even bridesmaids in her wedding.  I guess ol’ Trashbags didn’t make the list.  GOD that girl was the ABSOLUTE worst.

ugh GO HOME, Trash Bags. I don’t understand how you slept with everyone in the house when you were there like a total of 72 hours. image source: gawker.com

Finally, we jump into the health/exercise portion of the book.  Nicole interviews her trainer, Anthony, who also provided the workouts detailed in this book.  Anthony tries REAL HARD to sound like a exercise scientist or whatever, confusing the hell out of Nicole with words like “rapamycin,” to which Nicole replies, “now you’re just making shit up.”  But Anthony also says that you can develop “toner muscles” which made no sense, but I think he meant “more toned muscles” unless toner is a part of the body I forgot about.  My favorite part of all of this is that Nicole says she wanted to get in shape for two reasons:

I got this jaeger cap off too, no prob! image source: giphy.com

Before Snooki got her shit together, she used to get absolutely smashed at events and appearances.  Her make-up artist, Joey, recounts this time, saying that when he would get Snooki up in the morning before events (after a hard night out followed by a redonkulous amount of room service garbage food), “Nicole would be in bed, still drunk, with chicken bones stuck to her face.”  I laughed for a full minute at that until my husband asked what was so funny and I had to hide the book quickly and say “oh you know, that scamp Charlie Rose!”

I’ll leave you with this paragraph from Joey, which might just be the best thing I have ever read.

She’s a late sleeper, especially after a booze and junk food binge… I’d brush the crumbs off her face, straddle her on the bed, and do her make-up while she was still asleep.  Then I’d get her into her outfit for the day- it was like dressing a life-size rag doll- and basically carry her to the car.

6 thoughts on “Strong is the New Sexy: Part One”