check out my other review of Kashmere: The Purifying Mask

I wonder if the Kardashians are going to sue over all of this gratuitous K nonsense.  That’s THEIR thing.

SO almost every real housewife gets a “makeover” (lol) at some point after the first season, whether is be just stepping up their Botox game, getting a better stylist and make-up person, or, in the case of Kim Zolciak Biermann, just getting a whole new face.

she now looks like the Barbie version of her old self. image source: radaronline.com

On the plus side, it does look like her wigs have gotten better. And she looks less like a bargain basement Trisha Yearwood now.  Anyway, I have always been pretty neutral on Kim, although I was FIERCELY Team Nene back in the early days of the Real Housewives of Atlanta.  After Kim left the show, I didn’t give her another thought.  I never watched Don’t Be Tardy as it looked terrrrrible, and the name was just horrible, as most Bravo spinoffs are.  However, when I was sick last year, I accidentally watched a marathon of DBT and found myself oddly horrified slash fascinated with this crew.  I can’t believe Kim had FOUR more kids, especially after the dud that was her firstborn (seriously, Brielle might be the worst person on reality television and that is SAYING SOMETHING).

why is brielle morphing into you?  you look like two melted wax candles!  your second daughter seems sorta legit tho.  image source: pandawhale.com

Anyway, I was surprised that Kim never came out with her own line of wigs and/or cigarettes or even wrote a shitty book like the rest of her co-stars.  However, I guess this was because Kim was waiting until she had the PERFECT product line to drop on all of us!

I love how 90s this look is.  Dark skinny eyebrows with blonde hair, lip liner for days… image source: giphy.com

My BFF is the best and immediately ordered me some body scrub from the Kashmere line.  This was approximately 8 months ago and it finally arrived about a month ago.  I guess Kashmere was “working out some kinks,” but I know it’s really because they just wanted to make sure we were getting REAL QUALITY beauty products.

The best part was when my BFF got a shipping confirmation email saying that her order had shipped three days before she had placed her order.  After many, many moons of waiting patiently for my KASHMERE scrub to arrive and change my life, I finally received it.  To be fair, it had sat in my BFF’s car for a few days (weeks), but we both burst out laughing when we opened it. 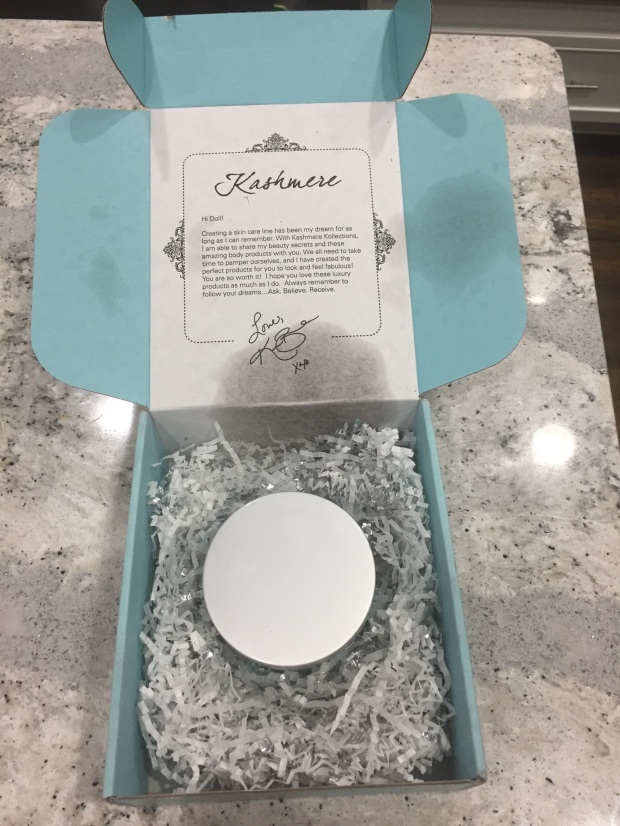 just a small amount of leaking.

We also laughed again upon opening the product to see that it was about 40% empty.  Maybe it was fuller before all of the leaking, but from someone that works in packaging (yes, I do have a real job), this should have been a big fat sign that their product was not properly sealed in its container.  Keep in mind, this shit is NOT cheap!  I think the scrub was $29, which seems outrageous, even for a “luxury” product.  However, I ASKED, BELIEVED and RECEIVED this product via the generosity of my BFF, so onward and upward!

I must admit, I did not have high hopes.  I wasn’t sure if this could actually harm my skin or make it fall off, but considering how much of it had leaked out, I wasn’t overly optimistic.  However, I was (sort of) pleasantly surprised!  It seemed like a normal body scrub!  It had a nice if forgettable fragrance, and smoothed over my skin nicely.  I will say, I prefer a body scrub in a tube rather than a tub, just because I feel like water gets into a tub in the shower and gets gross, but I feel like that is a small complaint as most scrubs are in tubs.  Will I buy this again?  Um, no, but I will finish the whole thing, which was the most I could have possible expected from KASHMERE.  Huzzah!

from the book of Weaves. amen. image source: giphy.com