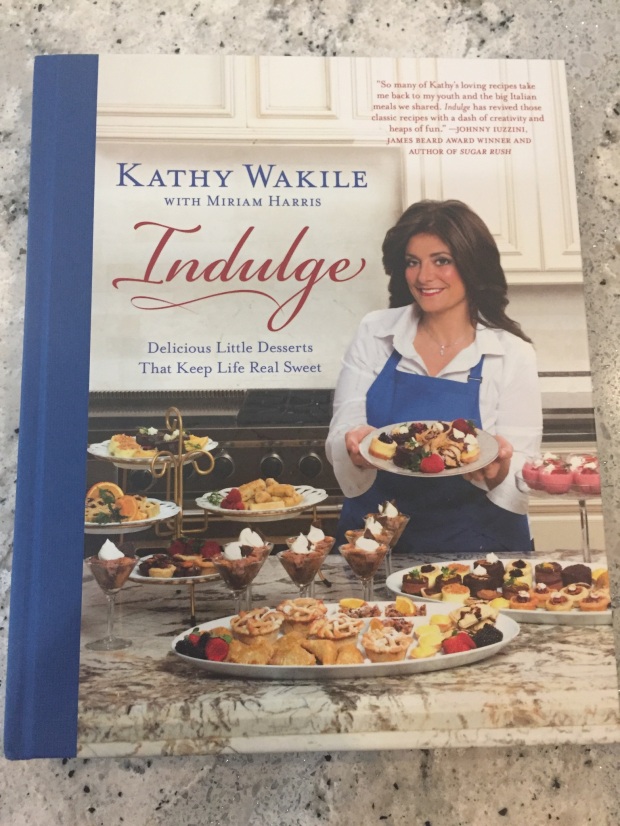 To me, Kathy Wakile always seemed like your mom somehow wandered into a Real Housewives franchise.  She was very normal, appeared to actually love her husband (Greek Rick Moranis, Rich Wakile) and her kids.  Beyond all of the ridiculous drama with her cousin, Teresa Giudice, and the presence of her amazing sister, Rosie, I never really understood why she was there.

can’t you throw a drink or something? image source: realitytvgifs.tumblr.com

But THIS season of RHONJ, ugh.  Kathy, stop being such a thirsty try hard!  Is losing the alleged friendship and good relationship of your cousin REALLY the main thing you are focusing on in your life?!  Or is it that you are no longer on tv?  Ugh, she has become THE WORST.  Sitting around talking shit about Tre with crazy pants Jacqueline is not going to win you any fans, boo boo.  Nor is it going to make Andy Cohen think he’s made a huge mistake by not having you back.  You aren’t batshit enough to be a housewife!  Take it as a compliment and get on with your life.

and when YOU go to prison, you can have a show too. image source: famewhoregas.com

ANYWAY, ol’ Kath managed to score herself a cookbook deal before she slid off into obscurity in the wilds of New Jersey.  Now, this dessert cookbook is not for the amateur pastry chef, nor is it for the basic cook.  Nearly EVERY freaking recipe included equipment I a. did not have b. had not heard of or c. did not care to purchase.  I’m sorry, I seem to have misplaced my twinkie pan! (NO SHIT THIS IS REALLY A REQUIRED ITEM FOR SEVERAL RECIPES). 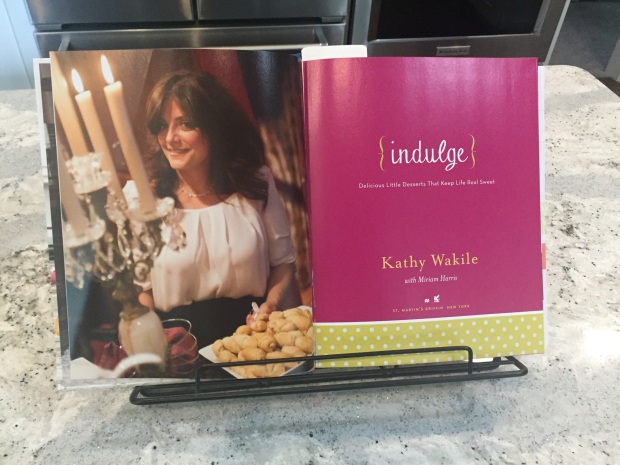 the photos of herself Kathy chose for the book are… interesting.  I kept expecting Michael Douglas as Liberace to pop up in the background of this photo.  I wonder if Behind the Candelabra was the original name for Indulge?

Indulge is broken into four sections: Fall, Winter, Summer and Spring.  Clever!  However, some of the categories don’t really make sense: is PB & J really a classic combo for Winter?  A lot of the Fall desserts sounded amazing (Petite Pumpkin Pies with Toasted Marshmallow Topping!), but I really didn’t want to have to buy twelve mini pie pans that I will never use again.  SO after much perusing, I finally found a Winter recipe that I could (maybe?) handle: Chocolate Volcanoes! 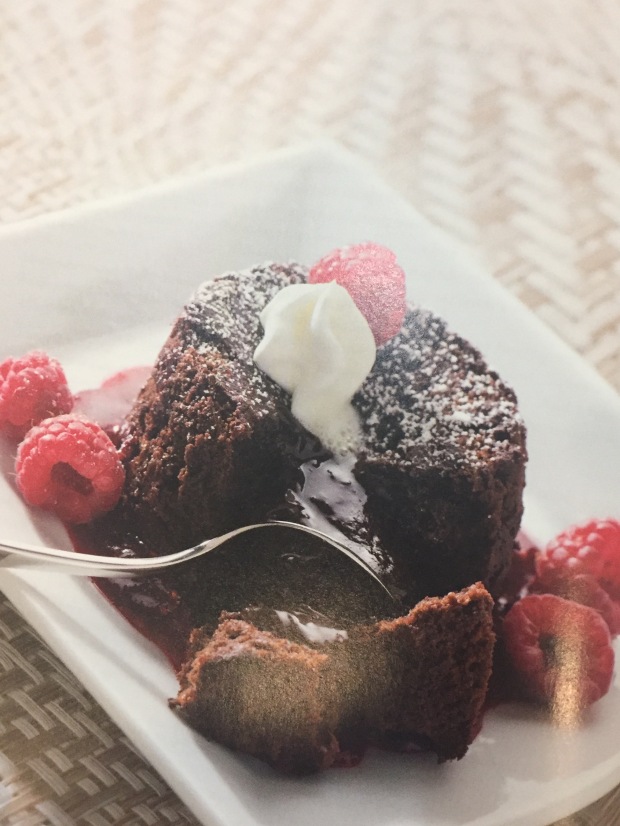 I can do this? image source: Indulge

I have had good success cooking with other Real Housewives of New Jersey: Caroline Manzo and Teresa Giudice, but this shit is intimidating.  I recruited my husband to help because even after attempting to read the instructions approximately 47 times, I couldn’t force myself to concentrate enough to have confidence I wouldn’t eff this up. 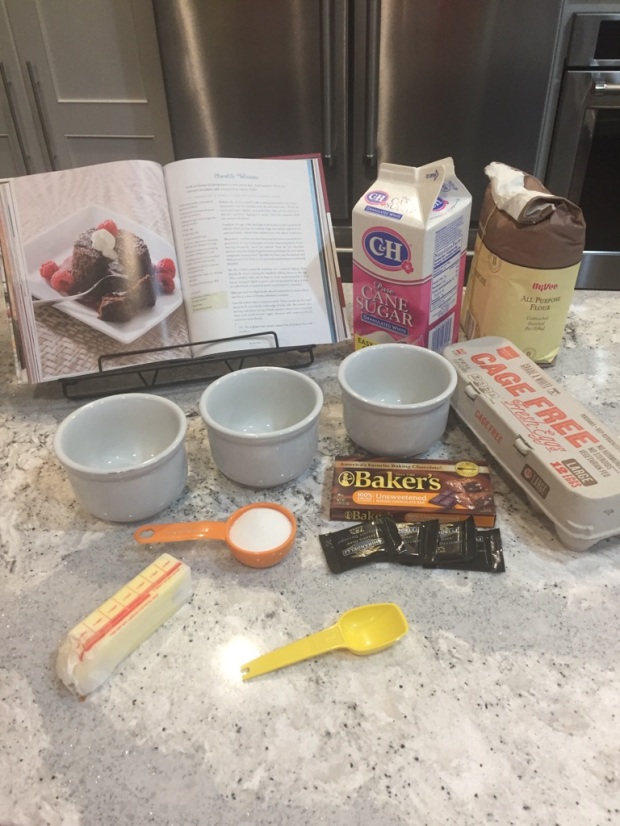 This recipe is no joke.  It is old school baking, where you have to actually rub the ramekins with butter and dust them with cocoa and sugar.  We made the chocolate in a bowl above simmering water and felt like fancy culinary scientists.  It definitely took longer than baking a traditional chocolate cake, but with two people working, it didn’t take too long.  I will say that Kathy recommends using 6 little ramekins or 4 larger ones.  I used three bigass ones and getting the cooking time accurate was… challenging. 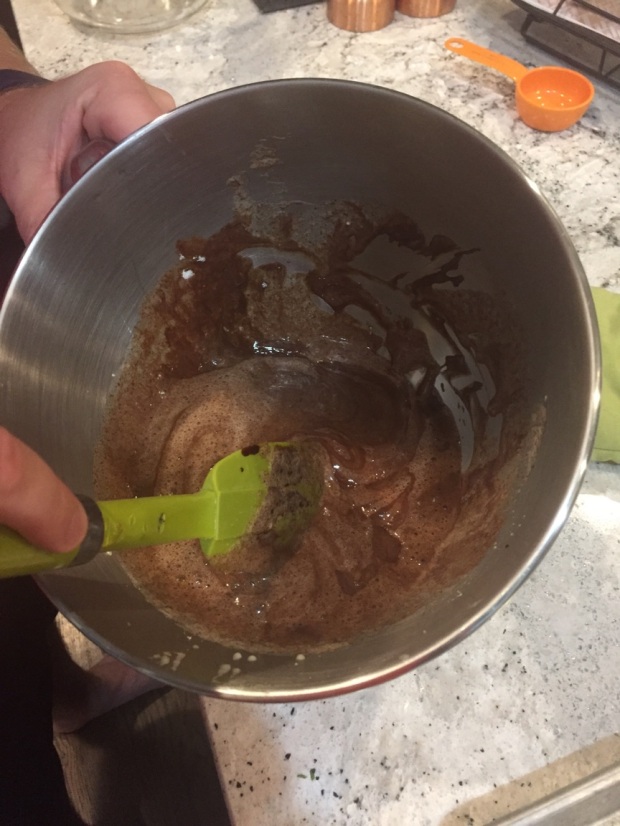 the batter was so weird… super thin and popped like Pop Rocks when we added the chocolate to the eggs/sugar.

As I said before, we had some cook time issues.  For some reason, I was terrified to overcook the volcano (we only baked one of them, these babies can sit in the fridge for a few days) so I checked it obsessively and pulled it out after 9 minutes (you are supposed to bake it until the edges are just set so the center is still liquid). 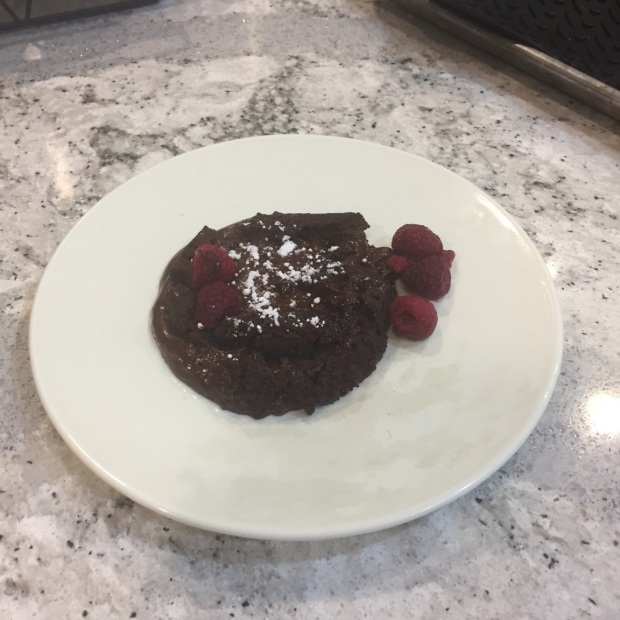 Sooooo it was just slightly (incredibly) flat compared to Kathy’s volcano as it was barely baked, but it was so freaking delicious omg.  I might have to actually buy some of the equipment listed in here to make some of her other recipes, because this was probably the best dessert I have ever made (not saying too much).  Kathy herself may be boring af, but homegirl can whip up a dessert!