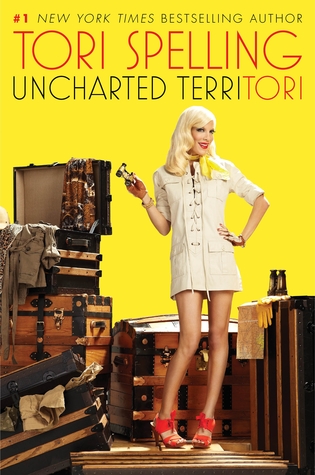 there’s a lot to unpack in this photo… oh god, help us all. image source: goodreads.com

What to say about Tori Spelling… I honestly can’t believe it has taken me this long to review anything by a woman than has been on more reality shows than a Kardashian and will literally slap her name on any company willing to give her a paycheck (pretty sure homegirl is currently shilling for the Psychic Friends Network).   Obviously, Tori (and her nefarious husband, Dean, who looks like the real life version of that ship captain from Family Guy) has had some… stumbles in the past few years, including one into a Benihana grill in what was quite possibly the weirdest celebrity (eh, I guess) story of 2015: Tori Spelling Hospitalized After Falling Onto Hibachi Grill at Benihana.  Also, there was that whole Dean cheated on Tori with a maybe (probably) fictional Canadian girl named Emily Goodhand (heh heh) and the shitshow reality show True Tori that followed.  Also, they are broke af somehow and also Tori is pregnant again with their fifth child.

So, life has been pretty tough for Tori for the past few years.  But this horribly named book was written back in the salad days of 2010, when Tori only had two kids and Dean’s hair/beard didn’t yet resemble Sadaam Hussein when they pulled him from that bunker.  Honestly, the whole thing just sounds like a humble brag about how Tori is SUCH a workaholic and perfectionist and she just does TOO MUCH and when she isn’t working she is MOM OF THE YEAR and puts all of her energy either into her children or her many, many (now failed) businesses.  Homegirl isn’t stupid- each chapter basically sounds like a pitch for Tori’s own: talk show, animal planet type reality show (she adopts a pig from Denise Richards, doesn’t that sound like B-List Mad Libs) and truly a longform Xanax commercial.  Tori is more neurotic than Carrie Bradshaw after breaking up with Big for the ninth time- she has more fears, neuroses and phobias than anyone else.  Of course she does!  Because Tori is THE BEST at everything.

Anyway, one of Tori’s biggest phobias is her fear of flying.  Honestly, this whole book should just be called “One Percenter Problems and Also Here is Why I am Broke as a Joke in the Future.”  Tori and her family rented a place in Malibu for the summer to get away from it all in Los Angeles (“it” being… unclear) and also don’t think they are so fancy, it is only a two bedroom apartment!  But Tori can’t even enjoy the luxurious beach time with her family because she knows she has to fly three times in July.  Poor Tori, what’s a girl to do?  Well, go to a past life therapist to find out if she were Amelia Earhart in a past life of course!  I mean, this girl is every scammer’s DREAM.  And this part actually made me laugh out loud- so apparently, Aaron Spelling was also deathly afraid of flying because once he missed a flight and it crashed and everyone died.  SO Tori “inherited” this fear from her dad but assumes there is some other reason why she can’t get on a plane.  But even the fucking past life therapist was like “hey crazy town, the reason you are afraid to fly is because  your dad instilled it in you.”  Tori, of course, was disappointed with this theory.

“how dare you imply my problems are not real and special?” image source: giphy.com

There is a really long story about having to report for jury duty in which Tori mostly online shops while waiting to eventually be dismissed due to her reality show filming.  There is a story about her co-hosting the Today show with Kathie Lee (and she mispronounces Hoda’s last name as “Cobe”) which just feels like Tori is trying to tell us she should get the job if KL (Tori’s fun nickname for Kathie Lee!) ever retires.  I get that Tori’s schedule is (was) nuts, but listening to her complain about having to do all of this for her family (while also mentioning things like renting an apartment in Malibu for the summer and then being gone the whole time) plus knowing what’s to come for their financial future really just makes you want to sit her down and explain how budgets work.  Like, you won’t have to do embarrassing endorsements or have to have your children’s birthday parties be sponsored by Depends or whatever if you maybe just cooled it on the whole moving every six months.  Up next, finally some Candy Spelling, which we were all waiting for…

everything is so unfair!  give me 80 million dollars, MOM! image source: giphy.com

2 thoughts on “uncharted terriTORI: Part One”