missed An American Girl in London: Blueberry Chia Muffins? Check it out!

been there, dahling, image source: bravotv.com

So after the (semi?) successful attempt at making a British-American dish like the chia muffins (some of these recipes seem to just be either very American or very British, tbh), I decided to get all kinds a fancy  and make something I have never done before- fish in parchment paper. Steamed Mediterranean Fish Parcels, to be exact.  Doesn’t that sound bougie af?

I don’t know what this means, but it sounds important. image source: giphy.com

On the side, I decide to make Maple-Glazed carrots because the fish parcels only had like 100 calories, which may be enough for a Bravolebrity (who tend to get most of their sustenance from Rombauer chardonnay, flat tummy tea and screaming), but not enough for this hearty Midwesterner.  My husband was working from home on this day, the LUCKY DUCK, so he got to partake in the best British-American collab since… America?  God, I swear I am getting dumber by the day.  Thanks, Betsy DeVos!

Once again, mostly because my goop experiment left me with a kitchen full of ridiculous ingredients, I didn’t have to buy much to make these recipes.  For some reason (I have no recall of ever purchasing them), I already had parchment paper AND capers, so I only had to buy fish and olives.  I was nervous about making the actual “parcels” as Marissa’s only instruction was to make a “tent” out of the paper with no “gaps.” Um, what the fuck does that mean, exactly?  I was FOR SURE I was going to burn my house down.  But it wouldn’t be my fault due to my bad reading comprehension and Marissa’s piss poor instructions.  #victim 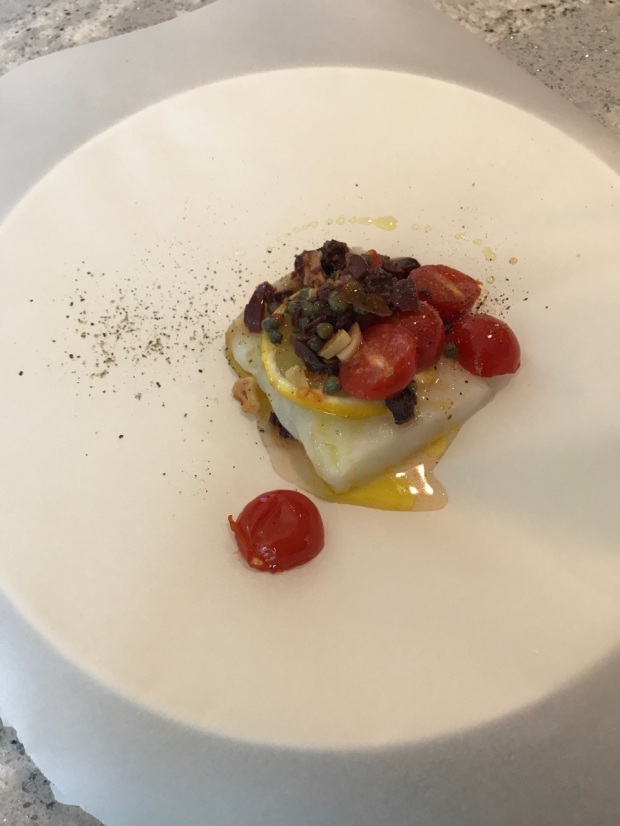 I felt like Ina Garten and Giada de Laurentiis had a baby and that baby was ME creating this dish.  I felt so smug wrapping my parcels really shittily and praying they weren’t immediately engulfed in flames due to my leaving “gaps.”  At least they looked nice and I would leave a beautiful talented corpse with giant teeth/gums and a chambray button down. Win/win!

While the fish was cooking, I made the carrots.  Now, Marissa suggests that you get carrots from your famer’s markets as the rustic greens really make the dish seem more authentic (um… what?  how is a basically one ingredient dish more authentic because it is attached to some grass?), but for some reason, MY farmer’s market, despite literally being in the middle of farm country, didn’t have any carrots.  Le sigh.  BUT I compensated by buying organic multi-colored carrots, so take that, MARISSA.  I feel that involving TWO of the secondary colors into my dish made it THAT much more “authentic.”

These were super easy, just some maple syrup, cayenne and cumin (Marissa suggests using cumin seeds instead of ground cumin, but I never pay attention to what I already have when I go to the store, so I have like 9 corianders in my spice cabinet that I have to use up before I buy anything else).  Voila!  (Side note- I read a blog once where the author wrote “wah la” instead of “voila,” and again, I blame Betsy Bil Bev Devos).

The parchment was a leeeettttle bit singed when I pulled the parcels out of the oven, but it didn’t really start on fire so IT DOESN’T COUNT. 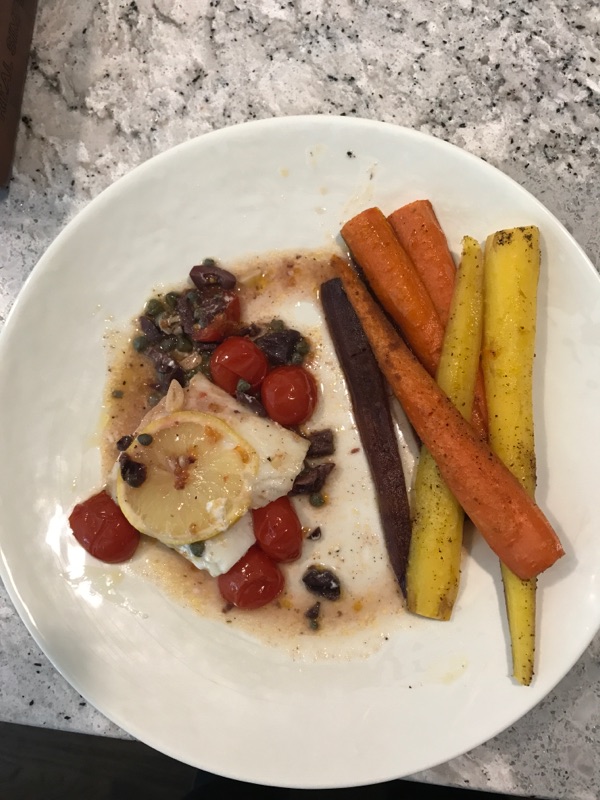 ta-daaaaaa!! I should win all the awards.

You guys, this was SO FREAKING GOOD.  Like eat in 10 seconds while standing up good.  And flame-related anxieties aside, it was really easy- just fish, olives, tomatoes, garlic, olive oil and white wine with a lemon slice.  You could totally use whatever you had on hand and get similar results.  I can’t believe I am saying this, but this cookbook (based on the 3 recipes I made) is GOOD.  Might I even recommend it as a nice hostess gift?

BRB going to go sob into my Rombauer (aka Cougar Juice) wishing for another season of Ladies of London.

be careful what you wish for my pet! image source: giphy.com

One thought on “An American Girl in London: Mediterranean Fish & Maple Carrots”